Everyone thinks that their town must have the worst drivers in the country. For drivers in Arkansas and Missouri, there’s research that actually supports that claim.

A recent study by SmartAsset reports that both Arkansas and Missouri are among the top ten states for the most irresponsible drivers, ranking number five and six respectively.

It’s a concerning statistic and it might make you feel a bit less safe on the roadways. More irresponsible drivers means a higher likelihood of an auto accident.

A higher likelihood of auto accidents means that you’ll need to be prepared if you’re involved in an auto injury accident and need the help of Arkansas and Missouri auto accident lawyers.

Almost a fifth of all Arkansas drivers don’t have auto insurance, and Missouri isn’t much better at around 16 percent.

Not only has that contributed to a significant number of fatalities from vehicle accidents, but even non-life-threatening crashes are made more complicated for law abiding, insurance carrying citizens who are involved in them.

They often need the help of Arkansas and Missouri auto accident lawyers, since they would struggle on their own to get properly compensated for their injuries due to the other party not having car insurance to help with compensation.

At The Krebs Law Firm, we have to travel these same roads in Arkansas and Missouri just like all the other drivers. We want you to be aware of these potential dangers on our state roads and know your options for proper compensation if you’re involved in a vehicle accident.

The Krebs Law Firm has a lot of experience with auto accidents, so if you’re ever involved in a vehicle accident through no fault of your own and you want someone knowledgeable on your side to make sure you’re treated fairly by the insurance company, give our office a call at 417-883-5886 or toll free at 800-345-0535.

Get Help To Fight For Your Rights

If you’re ever involved in a serious car crash, you’ll want to know what your legal options for compensation are regardless of what type of coverage the other driver might carry. Don’t hesitate to reach out to get the compensation you are entitled to.

If you want more information about what you should do after a Missouri car accident and learn more about common missteps (and how to avoid them) order your copy of our free book before you speak with another lawyer or anyone from the other drivers’ insurance company. 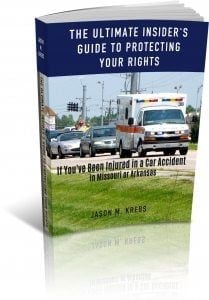 The situations where a victim would benefit from legal representation for a Missouri car crash far outnumber situations in which having an attorney isn’t necessary. We are here to provide you with the assistance you need after a car, truck or motorcycle crash. When you are ready to take the next steps, contact us at (417) 883-5886 for a free, no-obligation consultation.

Did you know that less than one third of Social Security disability applications are approved...